Rhett had a busy day yesterday. We started with an appointment with Dr. Pigpen at 9:15 (we were a little late because the elevator didn’t work) at Baylor All Saints downtown (Hi Ashley). Usually Thigpen does the ultrasound but this time someone else did it, so we got to specially request that we get some better pictures of Rhett, because frankly, Dr. Thigpen sucks at pictures. Great at doctoring, sucks at photography… 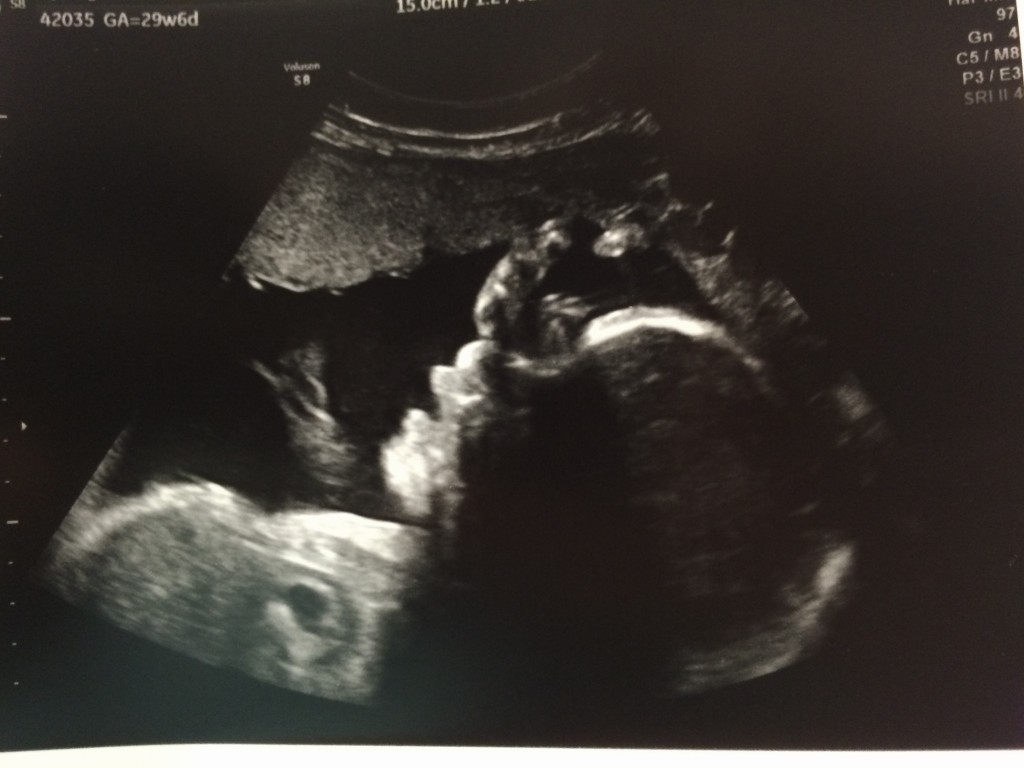 As you can see he’s quite dramatic with his hand on his forehand in a “woe is me” pose. And for those of you who aren’t very skilled in reading these pictures I will also post this handy dandy one I fixed up for Amanda’s dad of the second picture.

The appointment went great! Rhett is at 29 weeks and 6 days and is measuring at 30 weeks and 3 days. The bigger the better so he’ll be big and strong for his first surgery.

He currently weights 3lbs and 7oz which I’m sure is at least about a pound of Kit Kat’s.

So after speaking with Dr. Thigpen we found out that the plan will be to deliver on a Monday or Tuesday, likely a week before the due date of 10/8. We’ll be able to have two people in the room with us when we deliver Rhett, which will be mine and Amanda’s moms. Along with the 4 of us will be a team of up to 8 doctors and nurses so we’ll have a packed house. The plan is for Amanda to have Rhett vaginally (weird word to type onto the internet) and only in the case of an extreme emergency will Amanda be put all the way out for a C-section.

We started talking about different things and in the classic small world scenario I found out Thigpen was at the game 7 world series game in St. Louis along with me in 2011. Pretty nice to have a fellow Ranger fan on our team!

Overall the meeting with Pigpen was a good one, Rhett is growing and growing and is doing just fine. Amanda will start going for weekly checkups starting at 32 weeks.

After this it was on to Cook’s where we had an appointment with Dr. Roten, who is the Cardiologist. My mom and Amanda’s mom met us up there so we could have some extra sets of ears. Dr. Roten didn’t have a tech on hand so she did the ultrasound/echo-cardiogram herself which was really great. She’s seriously the best and always leaves us feeling so positive about everything. Just so great at what she does. After looking she confirmed what she saw the first time we were there that it is Tricuspid Valve Atresia with Malposed Great Vessels. So the plan will be to do the 3 surgeries for sure with the first one potentially being a modified Norwood surgery since the vessels are malposed.

The hope is that Rhett will get to wait about 4 to 5 days before having the surgery. They want to wait so Rhett has time for his lungs to start breathing on their own and to build up a little. While the baby is in utero his lungs are flattened since he’s not actually inhaling oxygen that is coming from Amanda. He’ll have to go on prostiglandons (or something like that) and for whatever reason that was something she wanted to tell us, even though I’m not quite sure what those are or what they do or how it affects all of this, but it was an important note. Apparently babies who go on this sometimes have trouble breathing on their own and will need a lung machine, but she said that babies who are carried nearly to full term often don’t need a breathing machine even if they are given this medicine. A definite plus.

So one of the important questions we had was whether or not we’ll get to hold him when he’s born. From the way it sounded we would have a few minutes with him where Amanda and I will get to hold him and then before the surgery we can pick up his head and feet and things like that, but I don’t think we’ll necessarily get to hold him in our arms. That part really kinda sucks, but if it’s what’s best for Rhett that is obviously the way we’re going. They are going to do an I.V. and the best way to do that is to go through his belly button where the umbilical cord was. I think that was why we couldn’t hold him because they want to make sure they can keep that open so they can use that and not have to go in another way.

He’ll be able to wear his own clothes, which is great because I know we’ll be getting a lot of awesome stuff for Rhett who is registered at Babies R Us, Target, Buy Buy Baby, and Amazon.com. Ha! They did say however that sometimes the clothes get lost in their laundry since they do all of the changing and laundry and all that stuff so not to do like family heirlooms or anything like that.

We also talked about potential learning disabilities and things like that, but Dr. Roten said that if you just spend enough time with them and figure out the best way for them to learn that they can go on to be quite normal. Many of the people who have done this have gone on to college and gotten normal jobs and all that stuff. So, I guess we’ll have to parent him the best we can. I feel like I’ll be able to crack the code and teach him, maybe that’s why God has set this task in front of us, who knows. 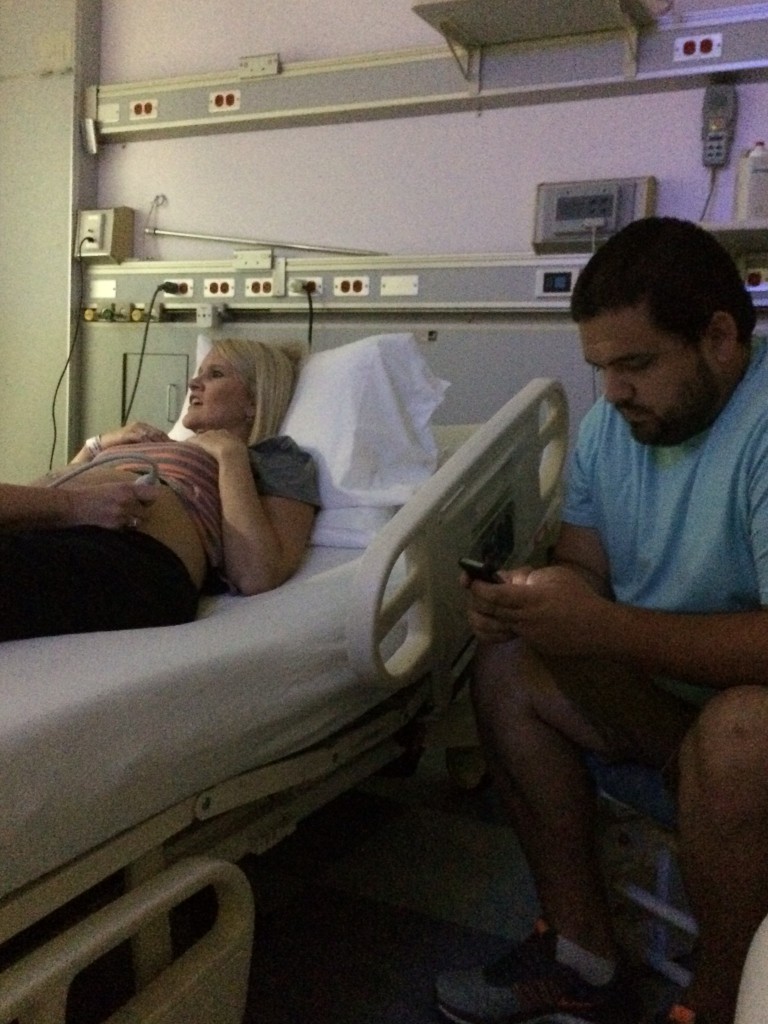 So after this meeting we ate in the “Camelot Court”. They have Chick Fil A y’all! So needless to say, I think we’ll be alright on the food situation.

Following lunch we had a meeting with Dr. Tam at 2pm (who is apparently notoriously late because people are always stopping him to ask questions)

We sat in the waiting room at his offices and passed the time with playing some of the games. 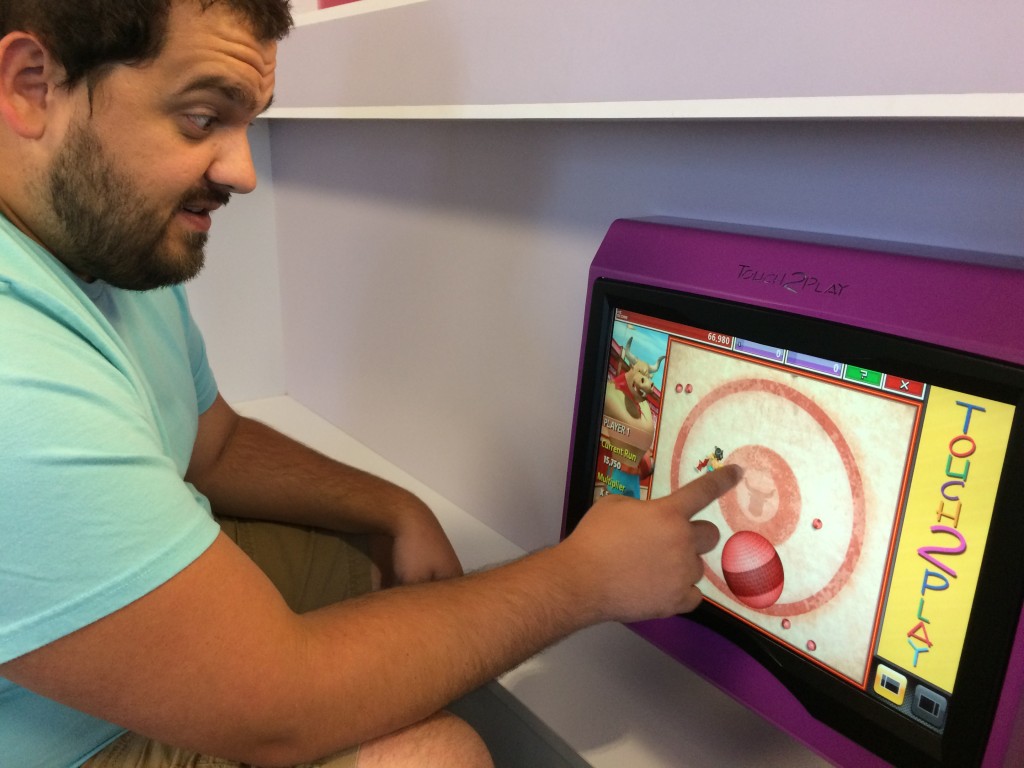 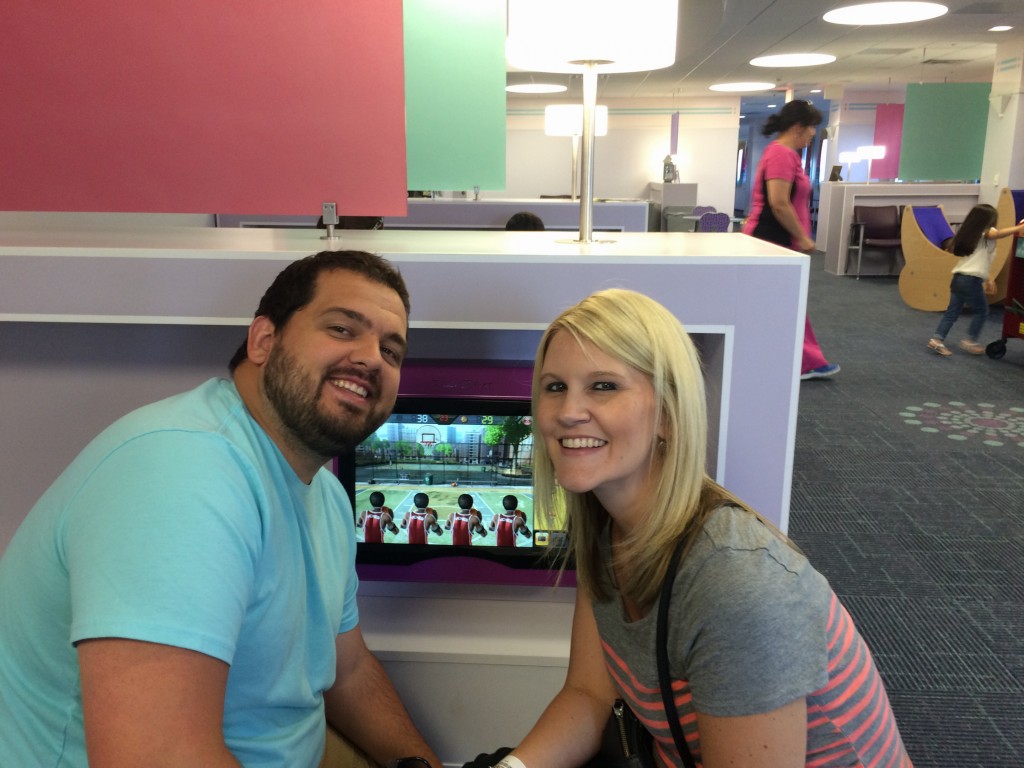 This woman is my favorite thing in the world. We always manage to have fun!

So we got to meet with Dr. Tam and he is super nice. He’s the one who’ll be doing the surgery on Rhett and will likely be doing all three of the surgeries. We had pretty much had all of our questions answered by the time we met with him, but it was nice to meet him and run through some of the few remaining details for the the first surgery.

The prep will take a few hours and once he makes the first incision they will call Amanda or me every hour to update us throughout the 5-8 hour surgery. Rhett could be there up to a few months if he has trouble eating after the surgery. This isn’t normally a problem for most kids when they are born, but since they won’t allow Rhett to eat until after the surgery they apparently have a lot of trouble eating.

Amanda asked how big the incision would be and Dr. Tam answered it perfectly. He said it would be the absolute perfect size to get the job done. Pretty funny moment with him.

After visiting with Dr. Tam my mom took us on a mini tour of the hospital since she used to work there in IT. This place is simply awesome. They have a lot of cool things to do with Talon when he comes to visit with his little bro.

Overall the day was just great. It left us feeling so positive and ready for this thing to get going. We’re so ready for this kid to be here! But for now all we can do is take care of the other business at hand. Keep eating Amanda!

We’ve got baby showers coming up and we got Rhett’s bedding. So for now all we can do is take care of the normal baby stuff! We’re excited about the showers and we are gearing up for the big day which is merely 8-10 weeks away!

Also, Robyn is putting in the first batch of the T-Shirts if anyone else is interested. We’ve had a bunch of people order them and I know we can’t wait to wear them and to see others wear them! Thank you so much for wanting to show your love for our little boy. I can’t wait to tell him all about this someday.

Amanda is at 30 weeks today and IT. IS. GETTING. REAL!

Thank you all for reading, sharing, and following along!!!

Amanda and I are so thankful for everyone and for Cook’s!