Amanda and I finally made it to bed at 1:30 Sunday night and we had to be up at 4:45 to get ready to take Rhett to the hospital for his Glenn surgery. Amanda had to get ready and I had to load the car but we also had to give Rhett a bath before we left. So in the car we were and we headed into Cook’s and actually arrived EARLY! Anyone who knows Amanda and I know how much of a feat this was. We checked in and they did all of Rhett’s vitals again and had us sign some paperwork. 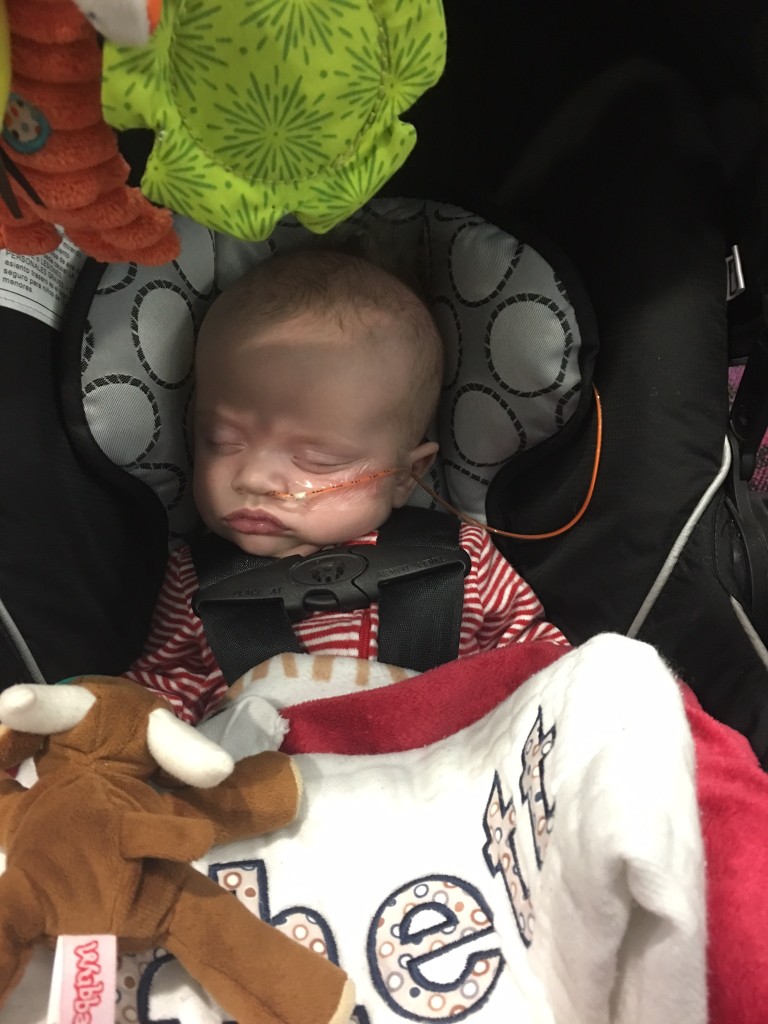 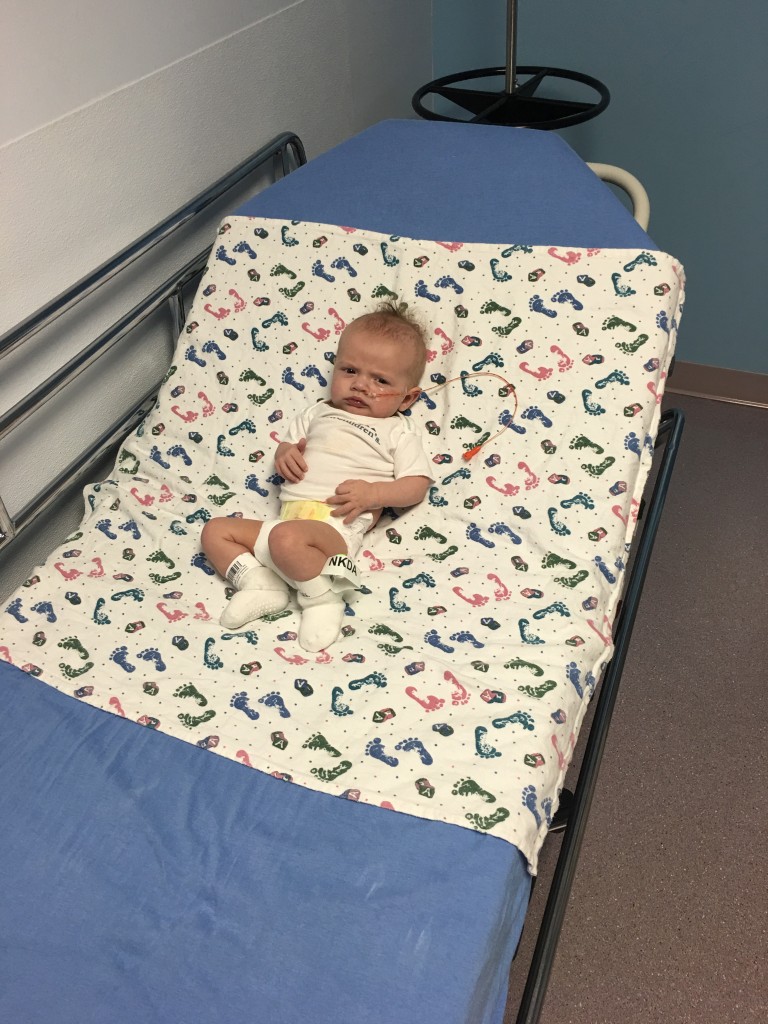 At around 9:00am they we took Rhett back to surgery and sent him away with the people who would help in the next step of saving his life. We knew he was in great hands, but obviously it was a very tough moment. We walked back to the CICU waiting room to be with our many family members who showed up. We went and had breakfast while they were getting Rhett ready for surgery and then went back to the room for a bit and they gave us a call at 11:21am that the first incision had been made and they were ready to start. The waiting now began…

We hung out for a bit and tried to lighten the mood with some Uno (Amanda and I have been hooked lately). Around noon we went down to the Camelot Court with about half of our crew and had lunch. FYI if you have a party of 12, noon is a terrible time to try to find a table. We received another call while at lunch that everything was going great and they were getting ready to put him on bypass while Dr. Tam did his miracle work.

So back upstairs we went to wait longer and we all just hung out and tried to pass the time. We received the final call at 2:10 that Rhett was finished with surgery and that everything went according to plan! They told us to go to the other waiting room so we could see Rhett get wheeled past on his way to the CICU. It felt like hours we were standing in the hall waiting to see our boy come through, while our family waited behind 8 small glass squares to catch a glimpse as well. 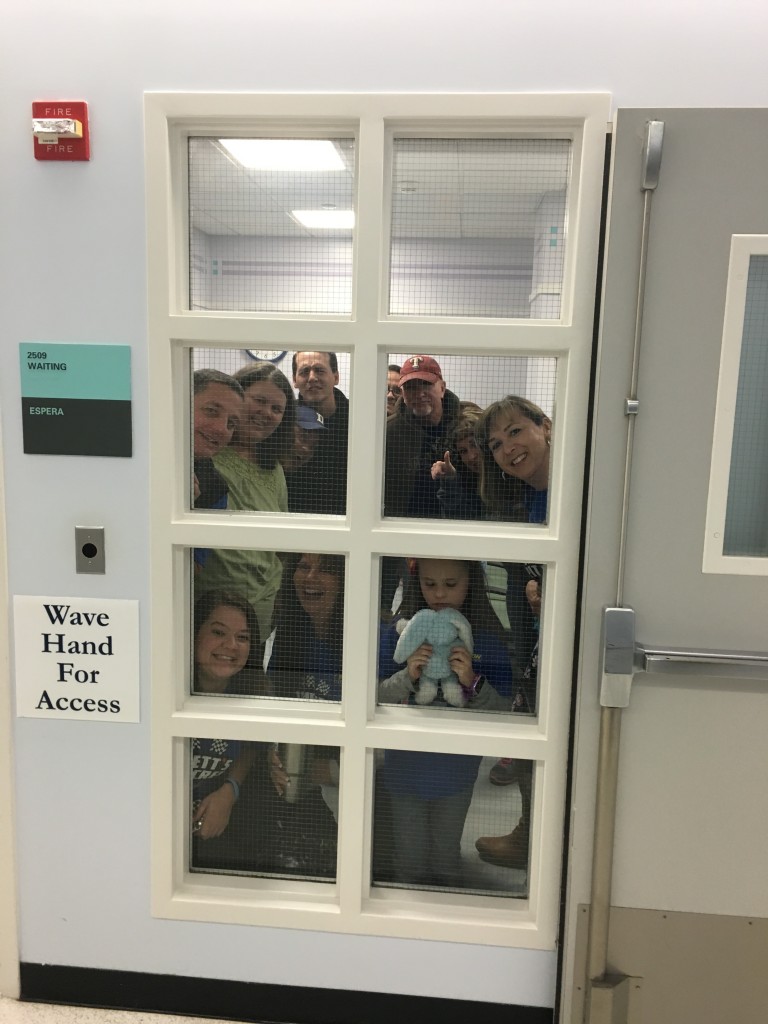 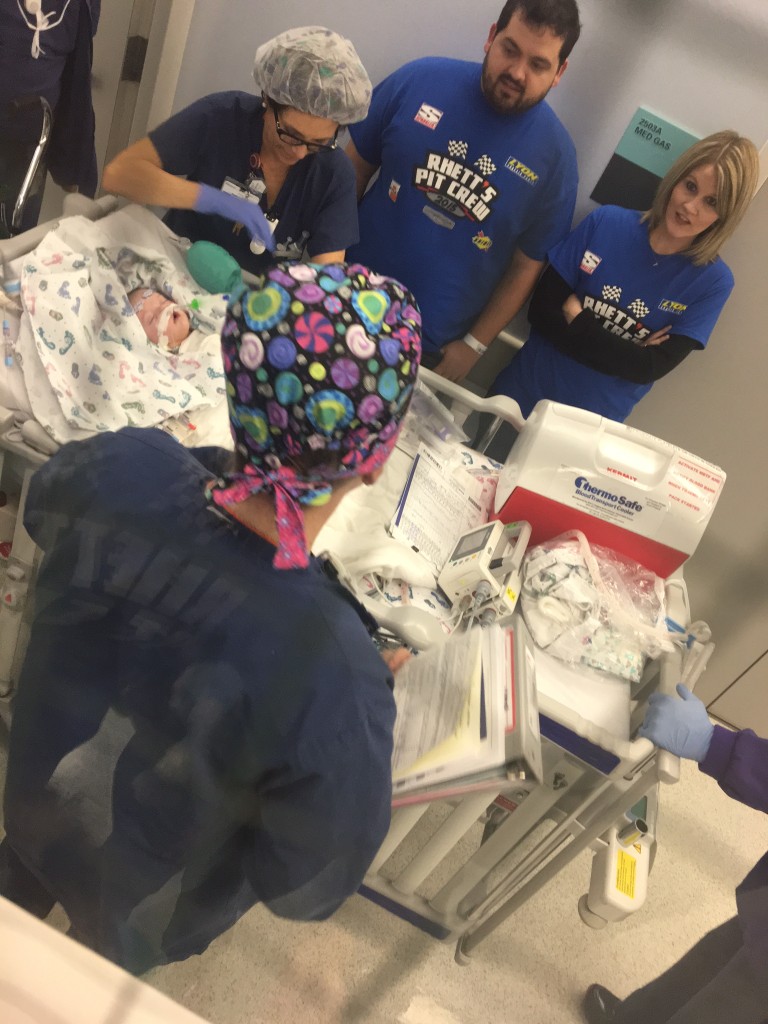 After they wheeled him past our family went to back to the other waiting room and all that was left in the room was another family. Amanda and I stayed behind and sat down to talk with them. Their son was about to go into his Norwood surgery with Dr. Tam and we could see the fear on their faces that we recognized as if we were looking into a mirror three long months ago. We wanted to give them some guidance that we hoped they wanted and we talked for about 10 minutes describing how our initial visit to Cook’s went. We showed them pictures of Rhett immediately following surgery to give them an idea of what to expect and gave them the website and facebook page to go back and look at all that had transpired over our 33 days in the hospital with Rhett. I totally facebook stalked when we got back and saw that the momma had liked Rhett’s page and I sent her a friend request hoping that they wouldn’t take it weirdly. We knew we’d see them around and I knew how nice it was to see a friendly face of someone who has been through the journey before.

We were finally able to go back and see Rhett about 45 minutes later. He wasn’t nearly as swollen as he had been the first time and that was a very appreciated sight. He looked so much better, but he still was hooked up to countless wires and tubes and our little boy who had gone to bed smiling was laying there in what was obvious discomfort and pain even through all of the medicine that was being provided. It’s pretty safe to say that it never gets easier to see. We paraded our family in and out and they all agreed that this time he looked much better, but now the battle was really beginning. 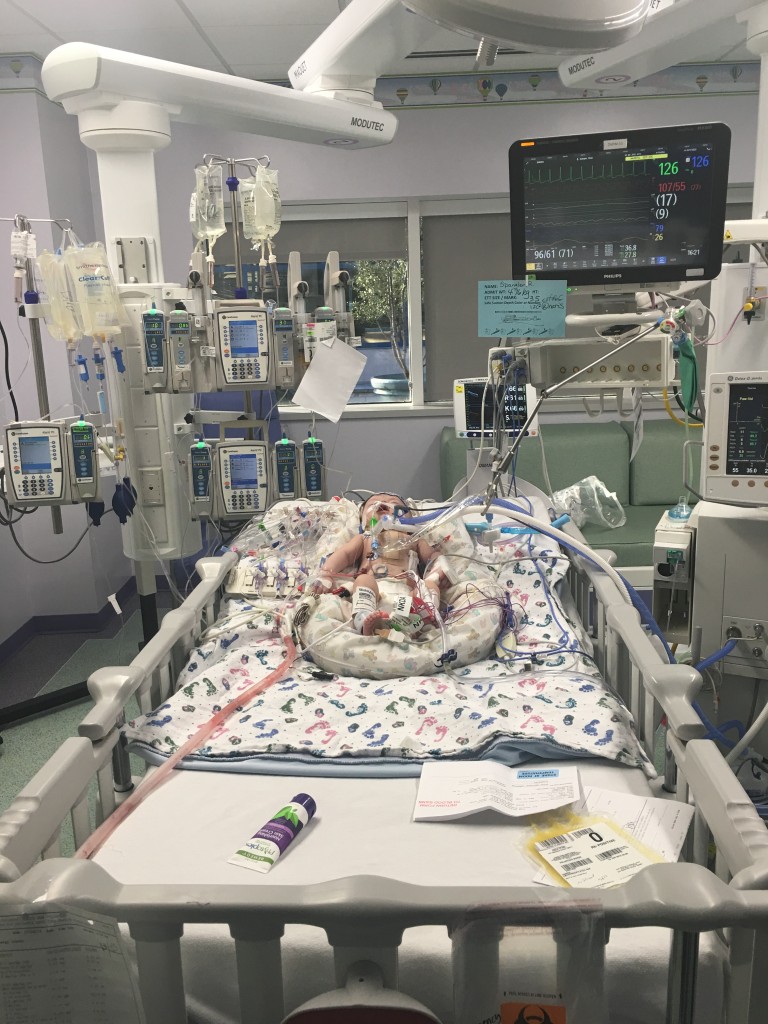 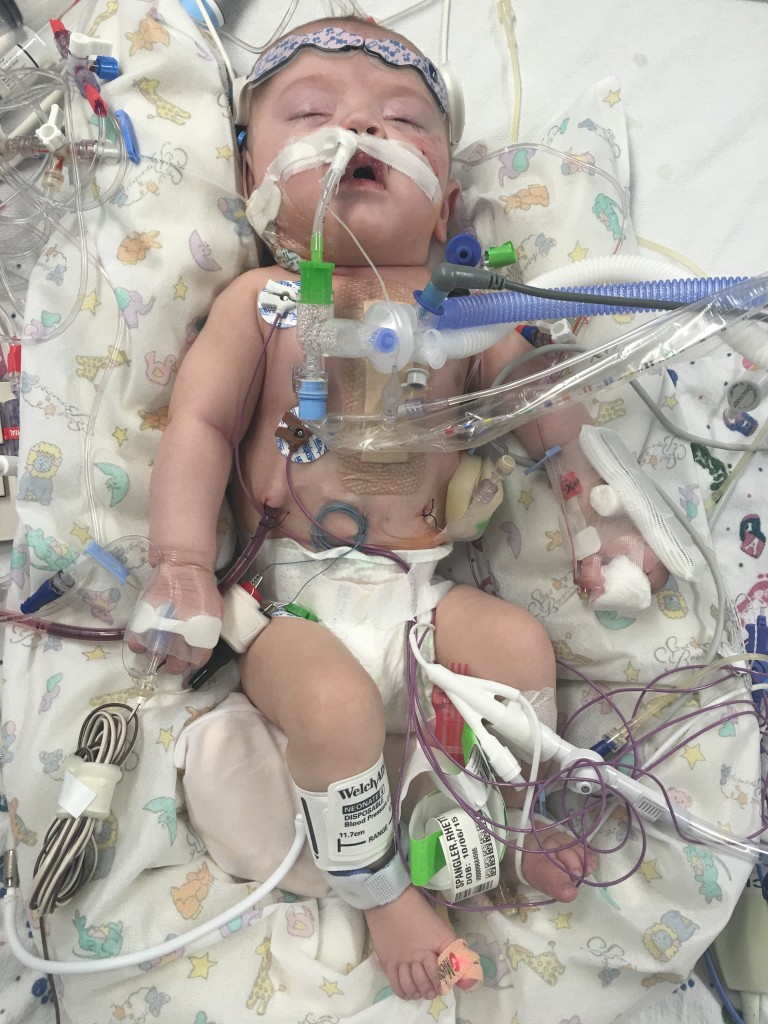 He was bleeding a little more than they had hoped out of his chest tube, so getting that to slow down was goal number one. They gave him some medicine to help with all of that and over the next few hours it made a big difference. They had told us originally that they had hoped to take him off of the ventilator that evening, but it just wasn’t in the cards. He was still having trouble breathing on his own, but he was stable and that’s what counted.

They gave him a blood transfusion to get him more red blood cells for the hemoglobin to carry more oxygen. This helped, but they would have to give him a few more over the next day.

We had a pretty amazing experience as we were carrying in way too many bags from the car as we were stopped by someone in the NICU waiting room who asked if we were Rhett’s parents. She had found the blog and facebook page and thanked us for showing the reality of what to expect. The real reality that not many people have shared with the pictures immediately after surgery. Her little girl was getting to go home on Tuesday, she was very excited.

As we were talking to her the mother and father of the people we had talked to earlier that day stopped and chatted along with us and they were very thankful that we had taken the time to speak with them earlier and said that it had made their kids feel so much better. There are no thank you’s as sweet as knowing that you have truly impacted someone’s life. Their son is now in the CICU with us and he is doing very well.

When we woke up today (Tuesday) they noticed what looked like a lot of extra fluid and put him on diuretics to make him pee more to get the fluid out. He was awake a little and the saddest thing ever is when you can see him making a cry face but there is not sound because of the ventilator being down his throat. 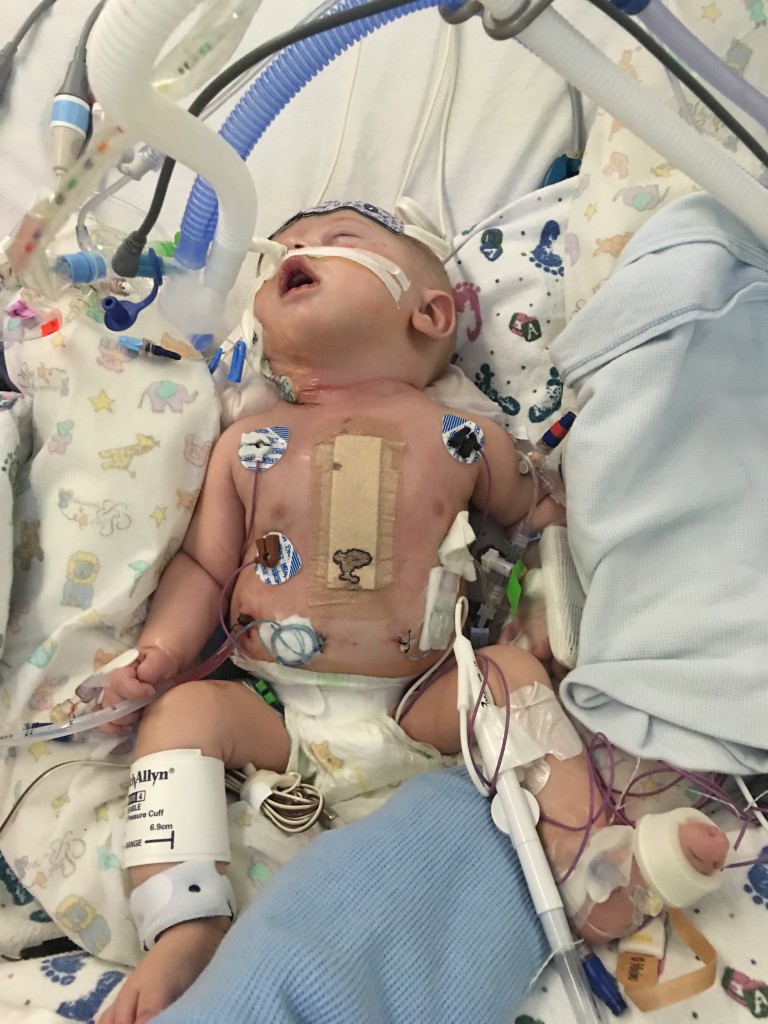 They did an ultrasound and found there were pockets of blood around the chest tube, but not enough to warrant another tube to be put in. Instead they increased diuretics. Rhett woke up for a little bit and watched TV for a few minutes. For a small second I hope he was reminded of being home and found a little comfort. 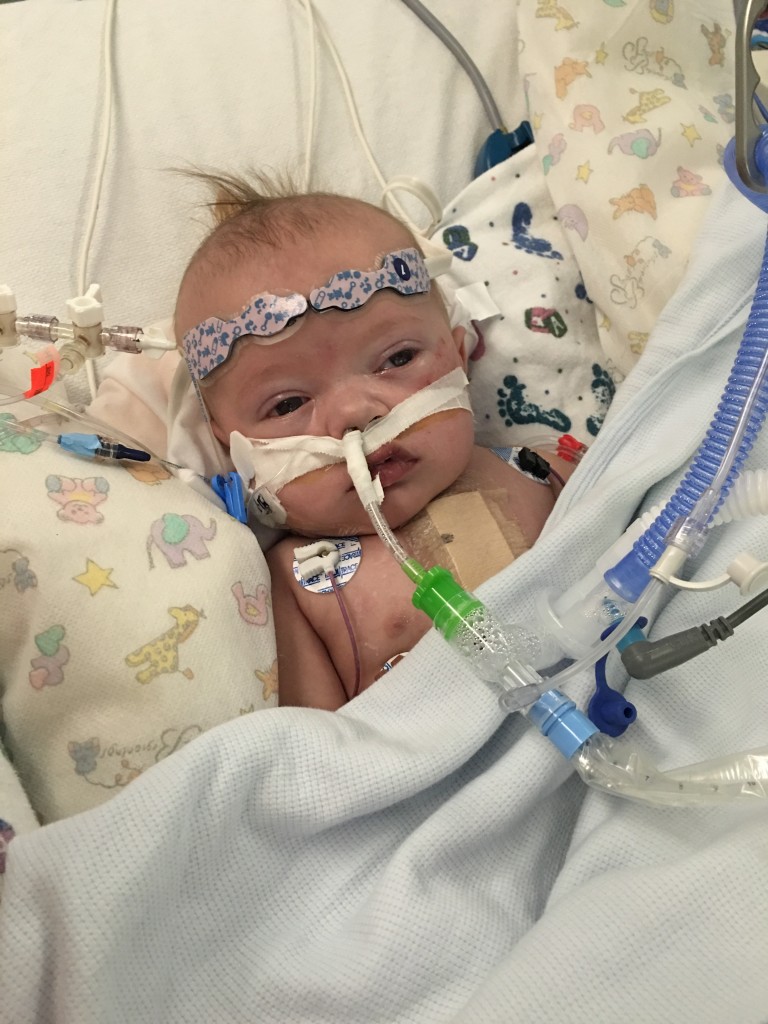 Dr. Roten wanted to take a closer look so she came in and did an echo because she saw less flow to the left pulmonary artery. They gave him temporary paralysis medicine so they could get a better look. Once she was what she wanted she liked what she saw and told them to start him on heparin which is a blood thinner to eliminate any clotting that might be forming where the central line (where medine is administered) that goes into the Glenn. She said his left ventricle is stronger than a stand-alone right ventricle, but still not as strong as she’d like the left ventricle to be. Part of the surgery is combining the left and right ventricles to work as one.

Talon got to come visit and he wanted to see his brother and give him a kiss, he had to settle for barely rubbing his head, but of course with him being a kid that was enough for him and we was ready to go play games with Aunt Jadi. 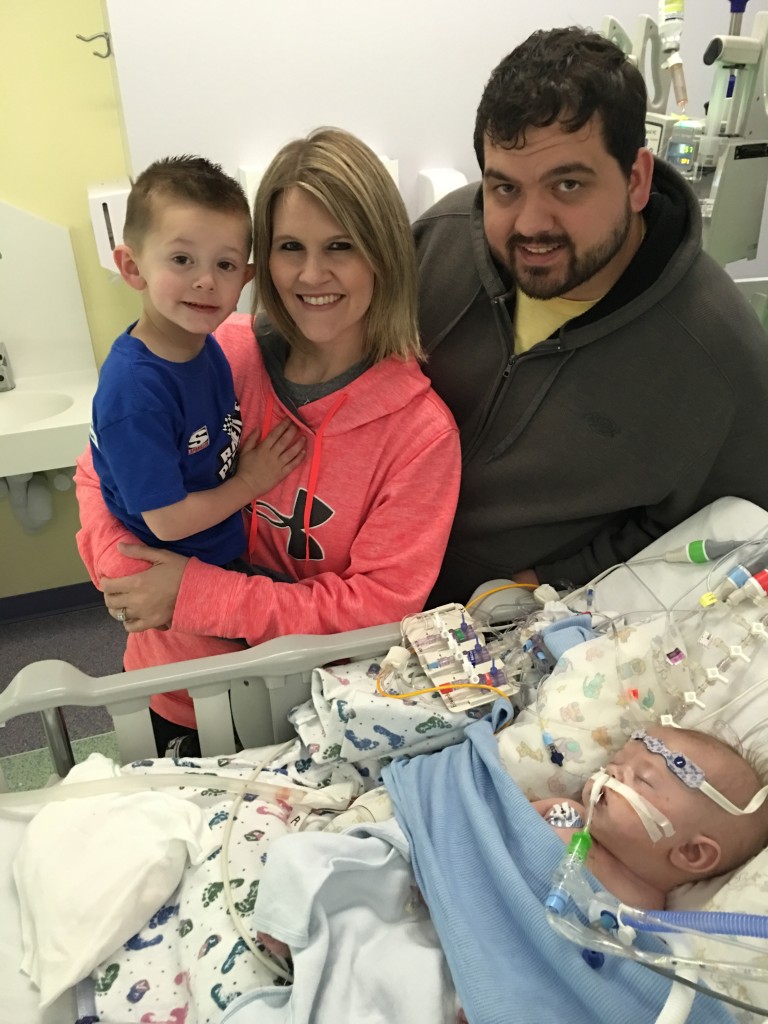 Amanda and I went to dinner and when we came back they were changing the tape on the ventilator and Karen (our amazing nurse for last night and tonight) was taking great care of him and gave him a bit of a “bath”. I’m kind of a night owl so I always end up staying up late and hanging out with the nurses. I love talking to them about why they chose the career they did and what their ultimate goals are. Hearing their answers is just more assurance that we are right where we need to be. The love they have for what they do is inspiring and it’s so comforting knowing that Rhett is under their care. Nurses are the best.

The goals for tonight are to keep him stabilized and let more fluid drain out to reduce his swelling. We are hoping that the doctors will like what they see and can take him off of the ventilator. His oxygen percentage that they are giving him is down to 21% and he his holding steady in the 70’s on his saturation.

Overall things are going well. As with last time Rhett seems to be about a day behind schedule with things such as removing the central line and ventilator so we are hoping to see some major strides tomorrow and he can wake up a little bit and not have so much stuff around him and definitely not have a tube going through his nose and down his throat.

I’d say we were better prepared for this time and it’s been a very business trip like mentality from start to finish. We can’t express enough how great everyone has been. We wouldn’t want to be anywhere else. Love you all so much and appreciate all of the comments on Rhett’s page. We read every single one and they fill us with joy to see the number of people praying and thinking of our dear Rhett. Can’t wait to post new pictures tomorrow of him looking much better! 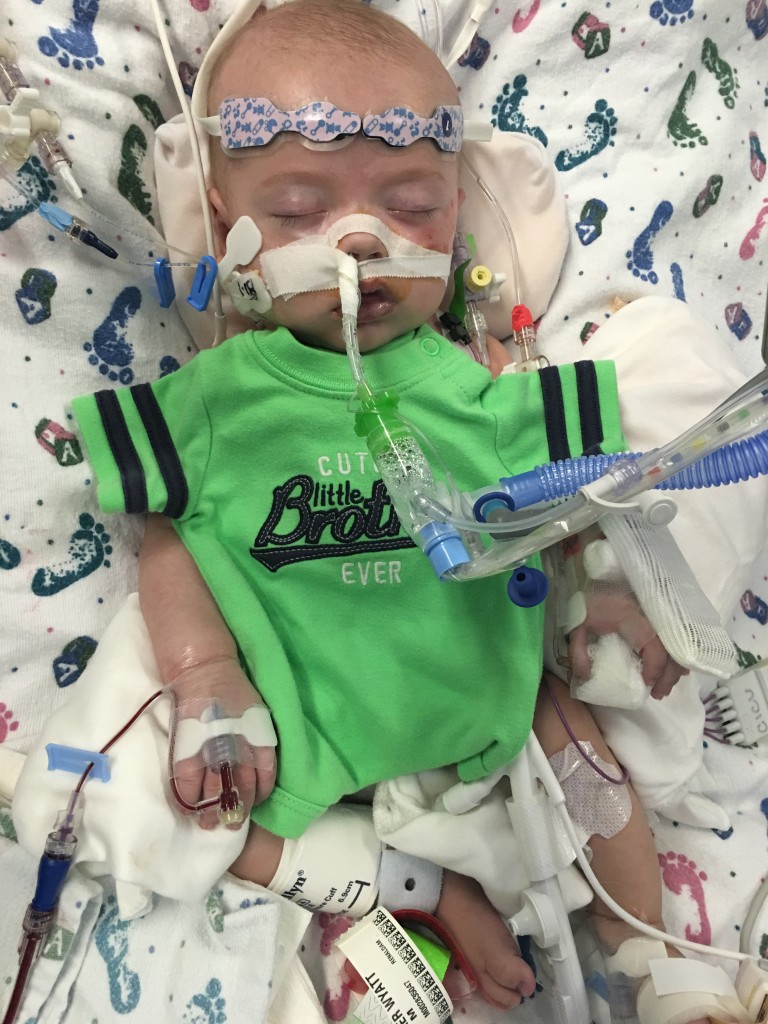